***Update – as more customers move to vSphere 6.x on VMAX, I expect this topic to be more poignant.  So I want to point out something about the changes detailed below.  The new changes for vSphere 6.x and XCOPY are ONLY for VMAX and no other arrays – not VNX, not XtremIO, not VPLEX, etc. and so far as I know, no 3rd party arrays.  You will also not find these changes fully documented by VMware.  That is fairly typical of their documentation.  This will be repeated at the bottom too, just for good measure.***

I thought I would tease a bit from my VAAI whitepaper and talk about VAAI performance with vSphere 6.x and VMAX.  In particular I’m going to focus on XCOPY which is the primitive called during copy operations e.g. cloning, SvMotion.

Let’s start with a quick reminder of this particular VAAI primitive.  XCOPY or Full Copy delivers hardware-accelerated copying of data by performing all duplication and migration operations on the array. Customers can achieve considerably faster data movement via VMware Storage vMotion® and virtual machine creation and deployment from templates and virtual machine cloning. Basically what this means is that VMware passes off the job of copying data to the VMAX which can do it much faster than the host.  We’ve had this functionality now for quite a while – going all the way back to Enginuity 5875 and vSphere 4.1.

One of the limitations of the copying, however, has always been the extent size.  VMware defaults to sending us 4 MB extents for thick vmdks (ZT and EZT) and 1 MB for thin vmdks.  On the VMAX (and VNX) we were able to adjust the 4 MB up to 16 MB, but thin vmdks remained at 1 MB.  For very large VMs, even with this 4x improvement the operation could take time (granted far faster than the host copy), but for thin vmdks we were still stuck with 1 MB.  The nature of the XCOPY implementation on the VMAX (all but rectified on the VMAX3 and VMAX All Flash) also meant there was a finite number of resources available for the copy job so large VMs could switch over to host copy for a time.

In any case EMC wanted more so we went to VMware development and said look our array can copy very large extents efficiently any chance we can increase that 16 MB number.  Fast forward to vSphere 6.x where VMware has implemented that change for us.  The really nice thing about the new capability is not just the size, but rather that it is implemented through the VAAI plug-in we already use and it only applies to VMAX devices.  In the current vSphere 5 implementation, for our customers who run multiple arrays (non VMAX/VNX) off a single host, they are not permitted to change the 4 MB default size as it can cause issues with the other arrays.  In vSphere 6.x, however, the default size of 4 MB does not need to be altered because VMware will use the size specified in the VAAI claim rule for Symmetrix (VMAX) devices.  Here’s how this works.

In vSphere 5, you change the following parameter in the CLI to adjust the extent size:

This is a dynamic parameter, taking effect whenever it is changed.  In vSphere 6, this mechanism will still work, however as I mentioned we can now change the claim rules associated with the VAAI plug-in/filter instead and those will take precedence.  Let’s start by querying the available plug-ins on the ESXi host (vSphere 5 or 6) along with the filters.  This is the same for vSphere 5 and 6 as we need the VAAI plug-in and filter to use VAAI :

Now we can specifically look at our device to see if it is attached to the VAAI filter and supports VAAI.  This one happens to be on the VMAX3: 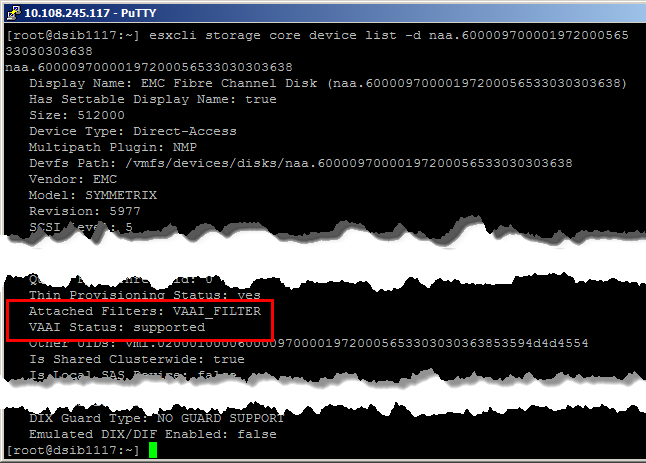 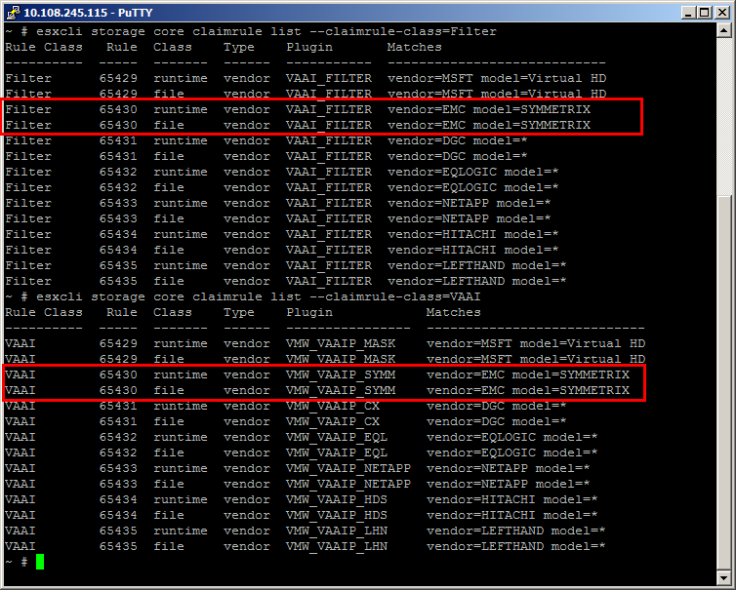 But in vSphere 6.x, we have these new columns related to XCOPY :

So now we can adjust the values to allow for a maximum extent size of 240 MB .  That’s 15x better performance than the current maximum.  As with all claim rules, changing them will not be dynamic for existing devices.  Once a device is claimed it is going to use the values that were set at that time.  While there are online methods to make changes to existing devices, I have not found them to be bullet-proof (and they are disruptive in any case) so I would make the following changes and reboot the ESXi host after the change.

To change the values, we need only adjust the VAAI filter.  Because of the interaction of the 3 different settings the columns represent (and the VMware rules), we need to set the first two to true in addition to changing the transfer size.  The commands to run on the ESXi host are (they will not return anything when run):

Following this reboot the host.  You can check the parameters afterwards just as before, and the new values will show:

And that’s it.  Whenever XCOPY is issued it will attempt to use the new extent size.  All VAAI functionality remains as before such as:

What about the thin vmdk 1 MB issue you ask?  Well, VMware has also made some changes there per our request.  VMware now makes a best effort to consolidate extents so they won’t just send 1 MB.  This has greatly improved performance.  In addition, the resulting cloned virtual machine benefits from this consolidation for if you then clone that VM, the resulting VM will perform much like a thick vmdk VM if it is cloned again.  Therefore if you are going to create templates from thin vmdk VMs, it is best to clone to template to take advantage of this change, rather than simply converting the VM to template.  By the way, whether you do the initial cloning with  XCOPY or without, the resulting VM will benefit from the consolidation.

The results speak for themselves.  This graph represents the cloning of a 250 GB VM (fully populated) for both thick and thin devices on the VMAX3 using the 240 MB transfer size:

I’ll have more detail in my whitepaper – just didn’t want to get too into the weeds here.  Here is the current paper if you need a refresher:

Note that as this is a feature of vSphere 6, this works for both VMAX and VMAX3/VMAX All Flash arrays BUT does not work for any other arrays, EMC or otherwise.

10 thoughts on “vSphere 6.x and VAAI performance boost on VMAX”